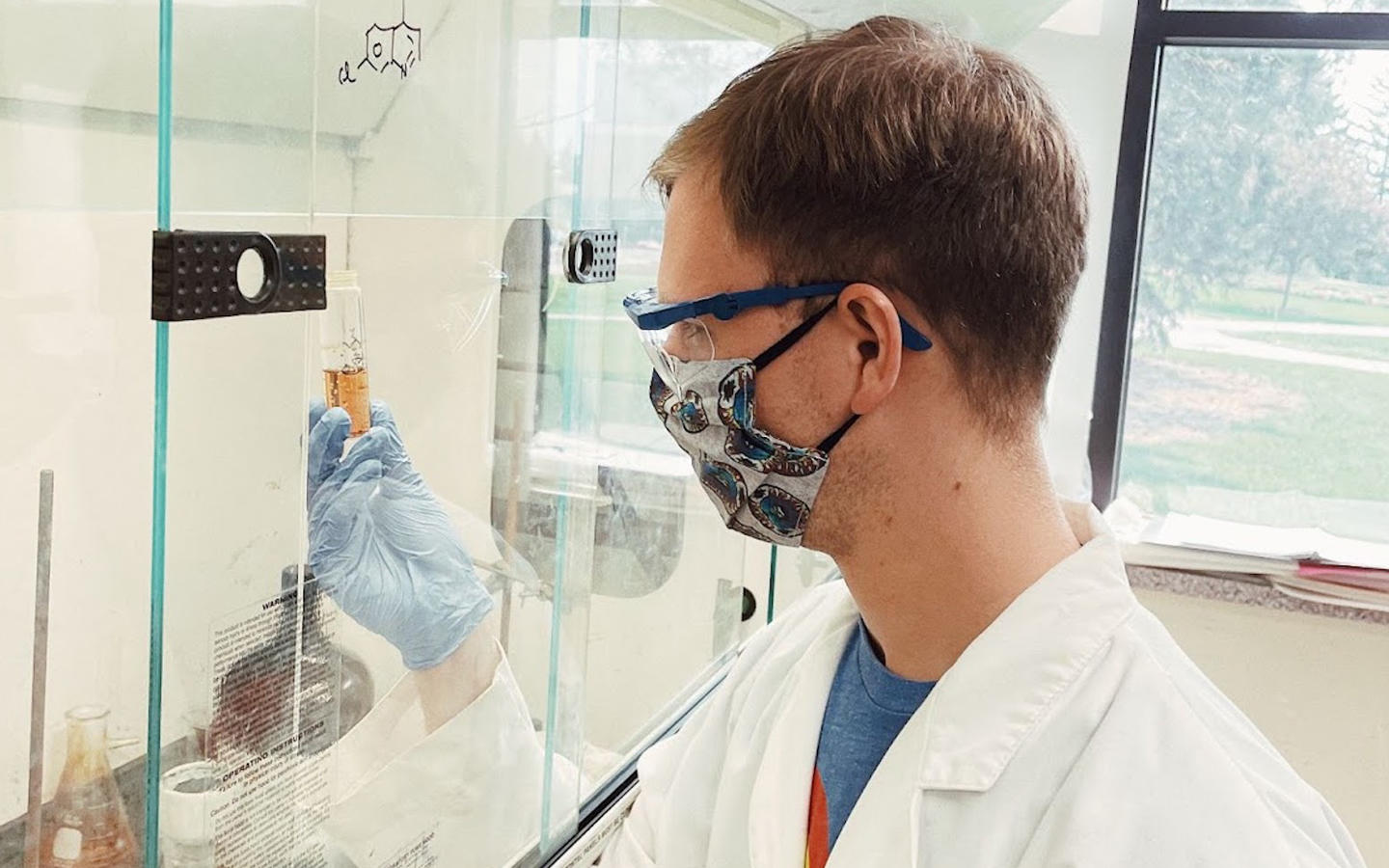 Matt Wittmer throws on a lab coat, his Grateful Dead T-shirt peeking out from under the lapel. He takes a deep breath to recover from his brisk walk across campus. Rather than grabbing lunch, he has decided to spend his free hour in the lab.

During his junior year, Wittmer joined a research team led by Venkatram Mereddy, professor of pharmacy practice and pharmaceutical sciences at the University of Minnesota Duluth (UMD). The focus of Mereddy’s research is the study and development of new generation anti-cancer agents. "He has also authored hundreds of papers and is a leading contributor in the field," Wittmer says.

For the past two years, Wittmer has spent countless hours studying reactions and researching molecules in Mereddy's lab. In the spring of 2022, Wittmer graduated from UMD with a bachelor of science in chemistry. Soon after, he took on a new role, graduate research assistant.

The Beginnings: A Budding Chemist

Wittmer wasn’t especially passionate about science going into high school. However, at the urging of his chemist father, he decided to take AP chemistry during his junior year. Things began to fall into place.

“I just started to notice how everything the teacher said had an application,” Wittmer says. Covalent bonds and electrolysis kept his interest in a way that book reports never had. By the time he was accepted at UMD, Wittmer already knew what his major would be.

Wittmer’s first semester at UMD went well. He enjoyed his general chemistry lectures in particular. “I knew how to do it and I thought it was really interesting,” he says. Junior year was a turning point for Wittmer. His seminar professor, Mereddy, often discussed the research opportunities on campus. He also showcased some of his own research dealing with anti-cancer agents, which Wittmer found particularly interesting.

“I couldn't believe that all of this completely unique research was happening right at UMD,” Wittmer says. By winter break of his junior year, he was volunteering in the lab with Mereddy. Last summer, he received the UMD Swenson Summer Research Scholarship to assist with his work.

The summer of 2022 marks Wittmer's entrance into Mereddy's lab as a graduate research assistant. The goal of Mereddy's research is to create more effective cancer medicine. He and Wittmer are working with existing molecules that have the potential to be developed into anti-cancer agents.

“Right now, we are working with an anti-fungal drug that has also shown some anti-cancer activity,” Wittmer says. But in order to make this drug an effective cancer medicine, they have to modify its properties.

As a graduate student, Wittmer will be teaching undergraduate courses and continuing his work in the lab. “I think I'm going to be busy,” he says.

Wittmer hopes to continue working in a research setting once he graduates. “I love lab work, so that's where I want to be.”