The University of Minnesota Women’s Club (UMWC) has been providing support to U of M students since 1914, shortly after the organization was founded.

To date, the Women’s Club has awarded more than $1 million in scholarships to undergraduate students in need of financial assistance. The organization awarded 59 scholarships for the 2021-22 academic year.

This has been made possible thanks to a combination of annual gifts from members, and individual members establishing their own endowed scholarships designed to enhance the UMWC Scholarship Program.

Meet some of this year’s UMWC scholars and learn how these scholarships are furthering their educational and career plans.

“Stories like these make us as UMWC members realize the impact that our scholarship program has for many students,” says UMWC Scholarship Committee Chair Georgia Nygaard. “It’s our gift to the future and to our future as a nation.”

For moms and babies 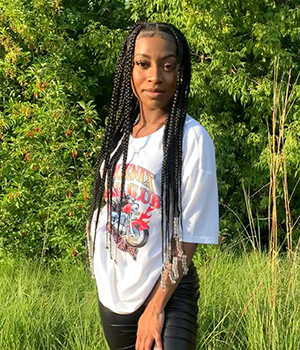 Kendra Egwim had always been interested in medicine. But recent revelations led her toward obstetrics/gynecology.

“I’ve been seeing things in the media and learning in my classes about how minority women, regardless of education, have more difficult birthing experiences in comparison with those not of color,” she says. “This pains me as an African American woman, yet it drives me even more to go to medical school.”

Egwim is studying biology, society, and the environment with a minor in chemistry in the College of Liberal Arts. She expects to graduate in the fall of 2023, after which she will prepare for the MCAT and then apply to medical school.

She says the UMWC scholarship has helped her in many ways, including giving her more time to fully explore some of the classes she is taking. For example, being able to take advantage of open lab time for her human anatomy class, she says, has helped her gain a more thorough understanding.

“If I did not have scholarship support, I would have to work many more hours than I already am, which would eat into my study time and opportunities for success,” she says.

“Scholarship support means so much, I could write an essay about how much it helps me and others.”

Greta Fischer was considering various careers in health care, when a high school internship at the zoo in her hometown, Duluth, changed her plans. “I realized that I could combine my love of animals and medicine as a veterinarian,” she says. 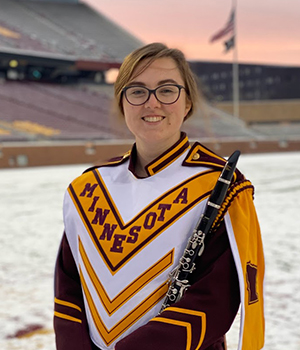 In addition, Fischer has been pursuing her passion—playing clarinet in the University of Minnesota Marching Band and pep bands. Fischer has been a section leader in the Marching Band, which involves teaching and serving as a role model for younger members. She is also the band’s music librarian, which she describes as a full-time job “I wouldn’t trade for the world.”

“The Marching Band has been a keystone in my college career,” she says. “It helped me grow immensely as an individual and a leader.”

She says her UMWC scholarship has given her the time to participate in the band and take classes that challenge and inspire her to grow. One of those classes was the animal handling lab.

“We work with sheep, piglets, and cows and learn how to administer vaccines, halter train for exhibitions, and perform basic husbandry like ear-tagging and clipping,” she says. “For someone who grew up in the city, getting my hands—as well as my pants, shirts, and boots—dirty was a great firsthand look at managing livestock welfare.” 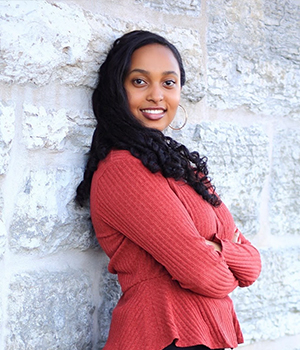 Eden Feleke decided she wanted to study chemical engineering after doing an internship at Boston Scientific while in high school.

“My first chemistry class in high school piqued my interest,” she says. “The internship at Boston Scientific, where I worked under engineers, truly got me interested in chemical engineering.”

Feleke is in her second year in the U’s College of Science and Engineering. She says she wants to work in either the medical device or pharmaceutical industry after earning her degree in chemical engineering or industrial and systems engineering. “I want to help develop medical devices and advance medicine.” Feleke, who works part-time for SUCCESS Computer Consulting—an internship that turned into a job, says receiving the Ruth Vickroy Jones U of M Women’s Club Educational Pursuits Scholarship has given her more time to focus on her studies and outside activities.

One group she’s involved with is the University of Minnesota chapter of the National Society of Black Engineers. The organization’s goal is to increase the number of culturally responsible Black engineers. Feleke serves on the board and has been involved with coordinating the national convention, conferences, and revising the organization’s constitution.

“The scholarship has helped me not have to worry about finances this school year,” she says. “I’m thankful to be the recipient of such generosity.”

Learn more about giving to a U of M Women’s Club scholarship.

How being named a Discovery Scholar brought a sense of peace to one U of M nursing student.

“I didn’t want to stand on the sidelines”