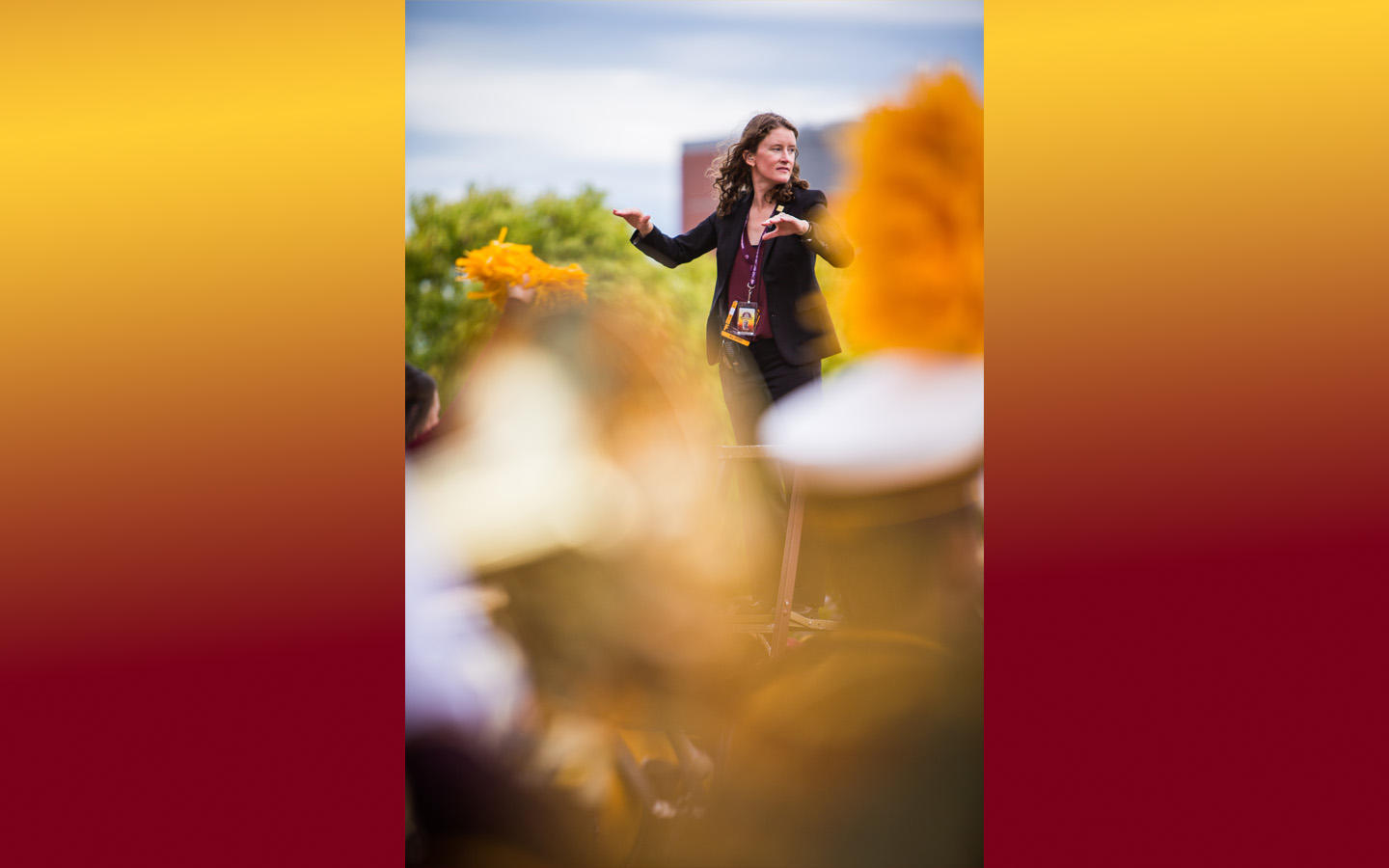 Betsy McCann is the first woman to direct the U of M Marching Band. Courtesy of Gopher Photo

Marching on
The U of M Marching Band celebrates 50 years of women’s full inclusion in the program.
By Shannon Keough

This year marks the 50-year anniversary of the passage of Title IX, the civil rights legislation that prohibits sex discrimination in education. On October 29, the University of Minnesota Marching Band celebrated this milestone with a special halftime show honoring all female-identifying alumnae of the band.

We spoke with Betsy McCann, ’03 B.A., director of athletic and marching bands, about her experience being the first woman to direct the band, the importance of donor support, and her vision for the future of the program.

Why is the 50th anniversary of women’s full inclusion in the marching band significant?

There’s a long history of women fighting to get into the band, and Title IX finally allowed that fight to be won. So we want to honor and celebrate the women who pushed for inclusion in the band. They paved the way for so many women who followed. 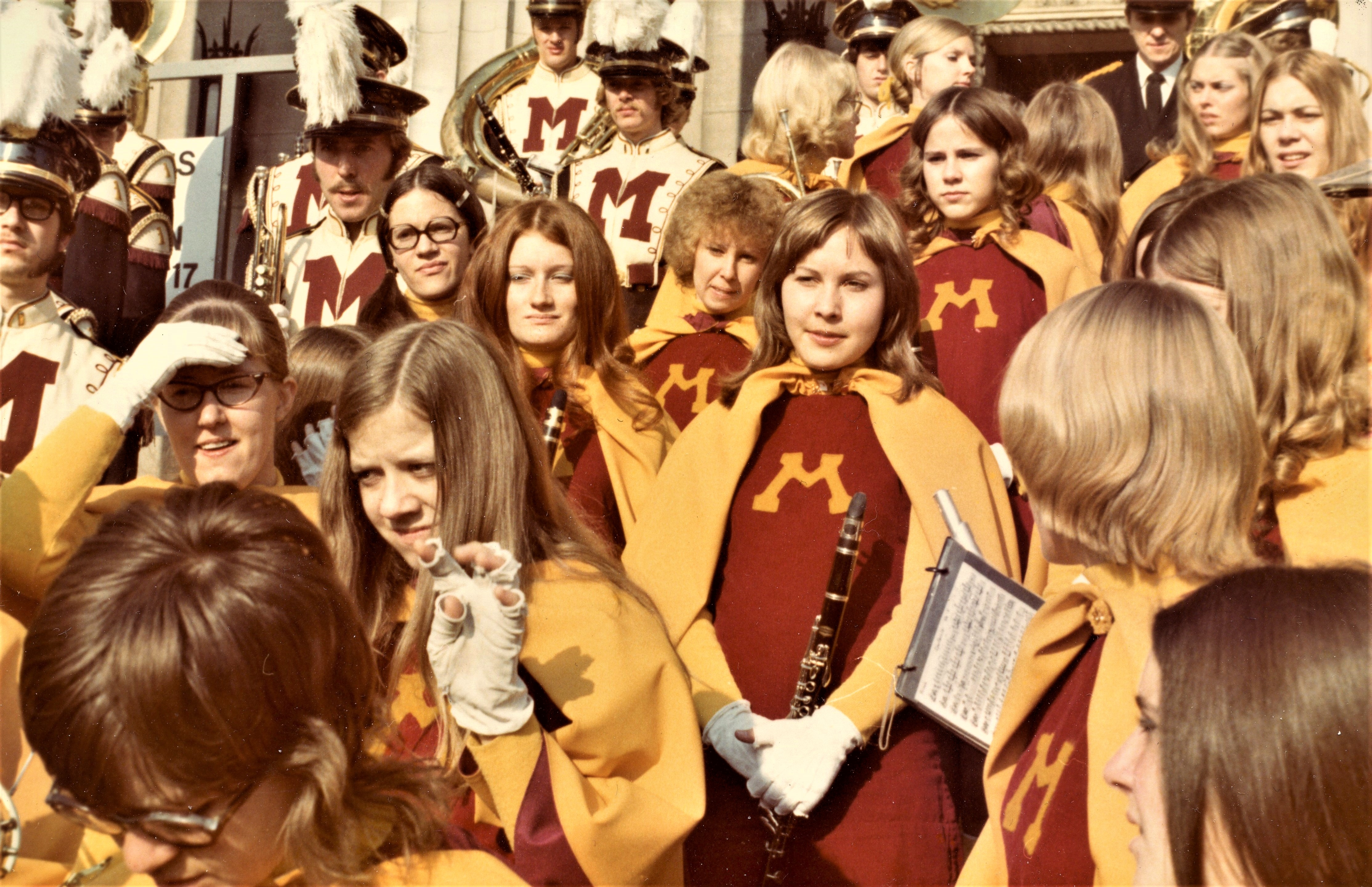 When you accepted your position, how did you feel about being the first woman to direct the band? What are your thoughts now?

It was hard to believe that at that time, in 2016, we had not had a woman in this kind of role. So, at first I was pretty uncomfortable with it, to be honest. I didn’t want attention because of my gender. I wanted to be recognized for doing good work.

But as word got out, I was contacted by a lot of women from the era that we’re celebrating right now–women who wanted to march in the band and weren’t allowed to–and they’d tell me they were so happy and grateful that we got to this point. That helped me realize that this really does mean a lot to people, and it is an important milestone–and it’s part of my story now. 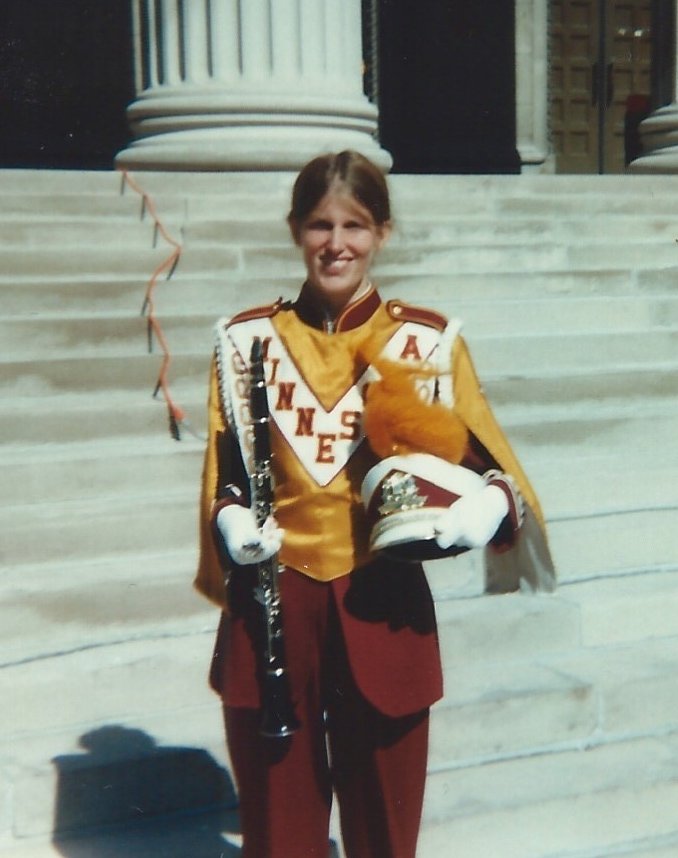 Never too late Jeri Walseth, ’72 B.S., attended the University of Minnesota at a time when women were not allowed to join the marching band. So in 1985, at the age of 35, she auditioned and made the cut. She marched in the band for three years. “I loved learning the halftime shows and memorizing the music,” she says. “Of all my accomplishments in life, being in the marching band is the one that makes me most proud.” Walseth also donates to the marching band. “I enjoyed my time with the U band program,” she says. “I wanted to make a contribution so future students could have the same great experience.”

You played alto saxophone in the U of M Marching Band as an undergraduate. What was your experience like?

I had a great experience. I learned so much, and I enjoyed being able to do something physical in my day. But unfortunately I could only do marching band for one year. It’s such a huge time commitment; I managed to make it work for a year. But I had to stop after that because, like many students, I had to work to make it through college. And that’s one way our scholarship donors are so helpful. Their support can make it possible for students to participate in band who might not otherwise have the resources.

How important is donor support to the band? How has it benefited the program?

The cost for us to operate at the basic level–things like running our camp, replacing instruments, buying uniforms–is getting more and more expensive every year. We are stretching simply to meet those needs, and we certainly don't have the funding for program improvements. Donors help in both of these areas. For example donors purchased our new drumline equipment, and the last time the band traveled to an away game was only possible because of donor funds. We’re so grateful to our donors for helping us continue to provide an excellent experience for our students–something that’s getting harder for us to maintain without extra support.

While I think it’s important to look back at our history, I also want to be reflective about what we’re doing now, and look ahead to the future. Are there other marginalized groups who are not represented? Are there things we can be doing now to create a more inclusive band? That’s going to be our next step.